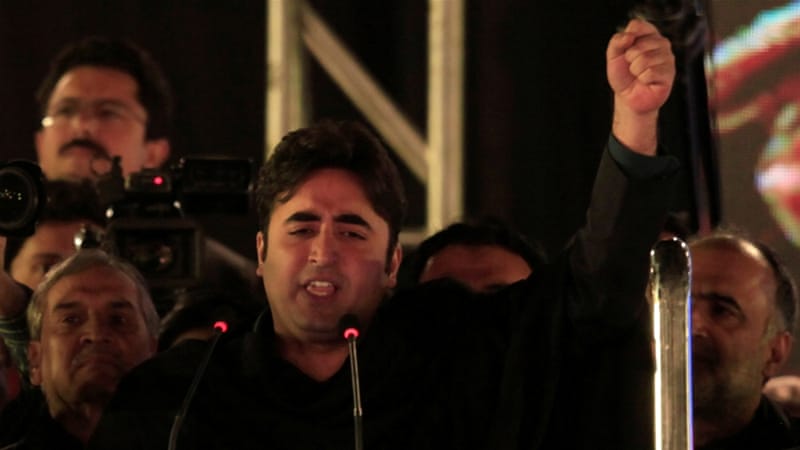 Speaking at a rally to mark the tenth anniversary of Bhutto’s murder in the southern Pakistani town of Garhi Khuda Bux on Wednesday, Bilawal led a crowd of thousands in a chant declaring Musharraf “a murderer”.

Benazir Bhutto, who was twice elected as Pakistan’s prime minister, was assassinated in a gun and bomb attack shortly after addressing a political rally in the garrison city of Rawalpindi while campaigning for elections in 2007.

In August, a Pakistani anti-terrorism court exonerated five men accused of involvement in the attack, while convicting and sentencing two senior police officers for willful negligence and tampering with evidence during the investigation into the murder.

The five men, accused of being members of the Pakistan Taliban, known by the acronym TTP, remain in custody pending a prosecution appeal.

Musharraf, who denies any involvement in the murder, was declared a fugitive by the same court for failing to appear during hearings.

He has not been convicted on any charges as of yet.

Flanked by his sisters Bakhtawar and Aseefa, who wiped away tears at points during the speech, Bilawal told the crowd he was disappointed in the court’s decision but would continue to fight for the independence of the judiciary.

Speaking to the BBC in an interview released on Wednesday, Musharraf denied any responsibility for the murder but said he could not rule out the involvement of rogue elements within the Pakistani military.

“[It is a] possibility. Yes indeed,” he said. “Because the society is polarised on religious lines.”

Bilawal Bhutto Zardari has succeeded his mother as chairperson of the Pakistan People’s Party, which was led for the last several years by Asif Ali Zardari, Benazir’s widower.

In the last year, however, Bilawal has stepped up to take more responsibilities, and will be leading the PPP’s election campaign for a general parliamentary poll to be held in mid-2018.