Japan will send an accident investigation team to Mauritius to look into the cause of an oil leak from a Japanese bulk carrier that ran aground off the Indian Ocean island nation in July, the country’s transport minister Kazuyoshi Akaba said Friday (September 18).

The five-member team will leave Japan on Sunday to carry out a two-week investigation into the Panama-flagged bulk carrier Wakashio. The probe will begin after a two-week quarantine to prevent the spread of the novel coronavirus, according to the Ministry of Land, Infrastructure, Transport and Tourism.

Although the Japanese government does not have authority over the Panamanian-registered vessel, it has obtained approval from Mauritius and Panama for Tokyo’s investigation as the ship was owned and operated by Japanese companies, Akaba said.

“We plan to inspect the ship and interview people involved (in the oil leak) in cooperation with both countries,” the minister told a press conference on Friday.

The Japanese government has set up a task force for the probe at the ministry’s Japan Transport Safety Board in charge of investigating transport accidents. The team will be led by Yuji Sato, who formerly headed the JapanCoast Guard, according to the board. 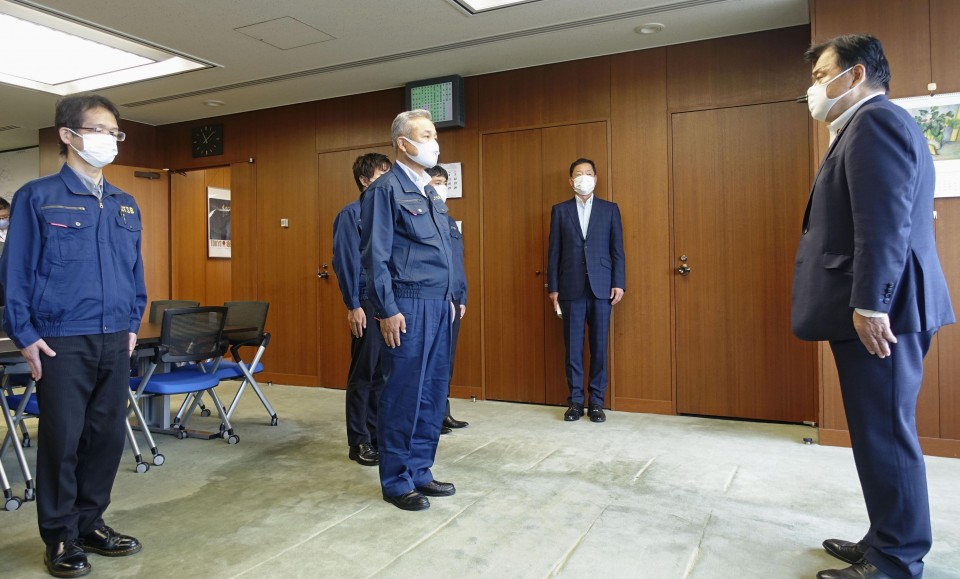 Japan’s transport minister Kazuyoshi Akaba (R) gives a pep talk to a Mauritius-bound inspection team in Tokyo on Sept. 18, 2020. Japan has decided to provide long-term assistance to help Mauritius deal with the cleanup from a major oil spill caused by the July grounding of a Japanese-owned freighter. (Kyodo)

Separately, the Foreign Ministry said it plans to dispatch a team to Mauritius around October to compile measures to support the island country’s efforts to recover from the environmental and economic damage.

Foreign Minister Toshimitsu Motegi pledged to Mauritian Prime Minister Pravind Jugnauth in their online meeting on Sept. 7 to provide long-term assistance to the country, including steps to enhance safety at sea and revitalize local fishery communities.

The ministry also said its relief teams sent in three batches since Aug. 12 to help oil removal and probe the conditions of coral reefs, mangroves and birds, have completed their on-site activities on Monday.

On July 25, the Wakashio owned by Nagashiki Shipping Co. and operated by Mitsui O.S.K. Lines Ltd. ran aground near Pointe D’Esny, an area designated as a wetland of international importance under the Ramsar Convention.

The vessel, which was en route to Brazil from China via Singapore, was transporting around 3,800 tons of fuel oil and 200 tons of diesel. More than 1,000 tons of fuel oil has spilled from the ship since Aug. 6, prompting the Mauritian government to declare an environmental emergency.

Mauritius arrested the male captain, an Indian national, as well as a Sri Lankan crew member on Aug. 18 on suspicion of negligence in operating the vessel.

The vessel was broken in two and the front section of the ship was towed to open water and sunk as instructed by local authorities, according to a Japanese disaster relief team dispatched to Mauritius following the incident.