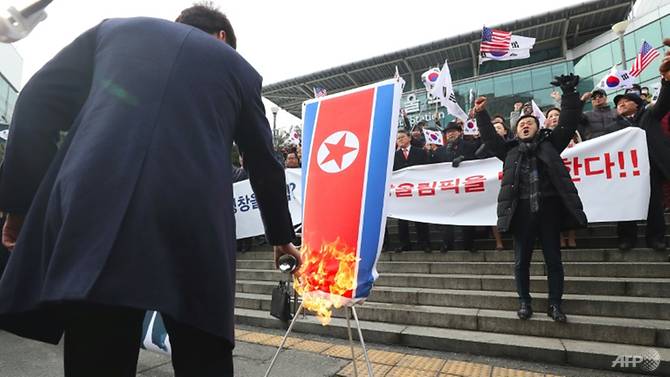 South Korea’s efforts to bring the North to its Winter Olympics in Pyeongchang next month are provoking a backlash among its own people, with accusations that Seoul risks turning the Games into a “Pyongyang Olympics”.

Many are fuming over what they see as exploitation of the South’s own athletes for political purposes, and accusing President Moon Jae-In’s government of making too many concessions to please its hostile, unpredictable neighbour.

South Korean police intervened when one group of protesters burned a picture of North Korean leader Kim Jong Un on the steps of Seoul’s central train station where a delegation from the North had arrived earlier.

Holding a sign saying “We’re opposed to Kim Jong Un’s Pyongyang Olympics!”, the protesters chanted that the North had “snatched” attention for the showpiece event from South Korea.

A series of events including concerts, joint training exercises and sporting demonstrations are planned around Olympics.

Hyon Song Wol, the leader of Pyongyang’s Moranbong girlband, smiled and waved to a crowd at the train station before the protest began.

“Seeing the citizens here welcoming us, I feel we will be able to successfully complete the concert,” Hyon was quoted as saying by a Seoul official, according to a South Korean media pool report.

Seoul has long sought to promote the Games as a “Peace Olympics” that would ease tension on the flashpoint peninsula, where the North has carried out multiple missile launches in recent months, along with its most powerful nuclear test to date.

Now it is scrambling to quell public anger.

In a flurry of sporting diplomacy, the two Koreas agreed this month that the North would attend the Games, the two would march together under a unification flag at the opening ceremony, and they would form a joint female ice hockey team – a deal approved by the IOC on Saturday.

Under the terms, 12 North Koreans will be added to the 23-strong South Korean squad, with 22 of them – the same size as other countries’ teams – chosen to take part in each game, including at least three North Koreans.

But the deal is being widely criticised for “robbing” Southern athletes of opportunities to compete at the Olympics in a bid to stage what many describe as a hurriedly-coordinated political show.

A survey earlier this month found 73 per cent of South Koreans saw no need for a joint team.

Sports should be free from politics, Seoul’s conservative Dong-A daily said in an editorial on Monday, and the team coach’s ability to select the team had been compromised.

“The South Korean government is focused on hosting peaceful Olympics, and says ‘yes’ to everything North Korea wants,” it added.